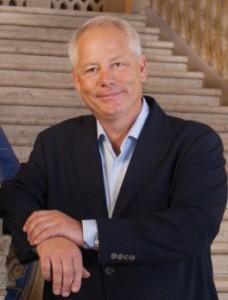 Rob Hayes was a middling student with average grades at Girard High School. He enjoyed the social aspects of high school and applied himself enough to earn decent grades. He was a bit of a harmless prankster requiring a few visits to the Principle's office. Rob played football his freshman and sophomore years and wrestled Varsity all four years.

Rob entered Clarion State University and roomed with fellow Yellow Jacket, George Drushel.Â  At Clarion, Rob availed himself of the new freedoms and social activities afforded at our finer Universities.Â  After a year at Clarion with less than optimal grades, Rob transferred to Kent State where he roomed with fellow Yellow Jacket and close childhood friend, Tom Parker. After his parents had the good sense to stop funding his non-educational activities, Rob took a job and began applying himself academically.

Rob briefly worked in New York City, before being recruited to practice in San Diego. As an Attorney, Rob represented a number of multinational corporations in a variety of litigation matters. He was on the national defense team for the Tobacco Industry, represented a number of large military defense contractors, Sea World and others.Â  He was admitted to practice in all courts of the State of California and the United States Supreme Court.

In 1996, Rob formed his own law firm, Hayes Simpson Greene LLP, which he grew to over 30 lawyers practicing throughout the state of California from offices in San Diego and Orange County. Rob was Managing Partner of the firm from its inception and managed its growth and expansion through 2003.

Rob formed Two Jinn Inc. in 2004 and serves as CEO and Chairman. Two Jinn is the nation's largest retail provider of pre-trial release services. Rob is also the CEO of Triton Holdings, LLC and Triton Management Services, LLC., and serves on the Board of Directors of Seaview Insurance Company. These combined entities employ over 600 people in California, Utah, Washington, Idaho and Nevada.

Rob's active community involvement includes: President of the Board of Trustees of the San Diego Museum of Art, CEO Member of Vistage Group 3080, former Big Brother and past Chairman of the Board of Junior Achievement of San Diego County.

Rob is an avid bird hunter, fly fisherman and outdoorsman. He and his wife Lynne have motorcycled throughout Europe. Rob also enjoys flying over the beaches and mountains of Southern California. Lynne and Rob have two children, Sterling, 15 and Berkley, 13. They reside in La Jolla, California.