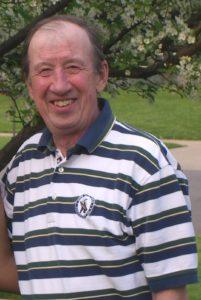 Robert "Bob" Bowen was born July 13th, 1938 in Girard, Pennsylvania. Being born to athletic parents, and one of five children, Bob learned to embrace athletics and competition at a very early age.

Bob began his education at the newly established Saint John the Evangelist School on Olin Avenue. He was a proud member of their first graduating class. He continued his education at Rice Avenue Union High School graduating in 1956. While at RAUHS he participated in football, basketball, and baseball all four years.

He married his wife Mary and they had three children Leslie, Robert Brian, and Michael. While raising their family Bob worked at Parker White Metal until retirement age. He also served as the Tax Collector for Girard Borough until the time of his death.

Bob was a lifelong member of St. John the Evangelist Church. When his children were enrolled at St. John's he spent countless hours working in the school. Bob was also a member of the Northwest Jaycees serving on many committees and community projects, his favorite being the Needy Fund Thanksgiving Food Drive and the Holiday Lighting Contest. He also served on the Girard Borough Planning Commission for many years. In 1984, Bob was the recipient of the Girard Athletic Boosters Award for distinguished public service and exceptional service given to athletic activities in Girard.Â

Bob was involved in baseball in the Glenwood League, first as a player and then went on to manage the Ferraro Ford team for 10 years. During that time the team won 10 Glenwood Championships. The team also won two Pennsylvania State NBC State Championships in 1964 and in 1971. Bob was named NBC (National Baseball Congress) All Tournament Manager for those years as well. Bob retired with a record of 200 wins and 37 losses, which earned him the honor of the most successful manager in the long history of the Glenwood League.Â

After a brief break from coaching baseball Bob became involved with the Tri-Boro Little Gridders at the inception of the program. When his sons decided to play Little League he once again became involved in baseball, helping manage the teams.

A friend, the basketball coach at St. John School, was moving and visited Bob, thus beginning a new chapter in coaching that lasted nearly a quarter of a century. With the help of his brothers -John and Jim - he began a new adventure, teaching hundreds of young athletes the game of basketball, and learning along the way. Not only did they learn basketball but he taught them sportsmanship, how to compete, teamwork, respect of others and themselves, and to conduct themselves as responsible young individuals. Along the way the team won several League Championships and one Parochial State Championship (1991, 34-0 season).

Many of his players had successful high school and college careers and continued onto coaching careers of their own. Some of his players joined his coaching staff later in life. Bob made a lifelong impression on many of the young athletes he spent a range of time with. To many of his players he wasn't just a basketball coach, he was a mentor and a friend, but he will always be remembered as Coach Bowen.