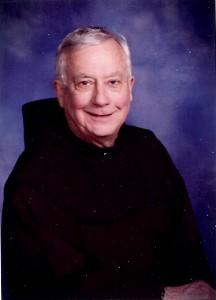 Father Charles Miller graduated valedictorian from Rice Avenue Union High School in 1957. While there he was involved in the year book, senior play, band, chorus, debate team and NHS. Charles wants to publically give long overdue thanks to the guidance counselor Mrs. Anderson. Without her advice and encouragement, he would never have applied to Notre Dame nor sought a scholarship.

Out of college Charles joined the Franciscan Friars, a religious order of the Catholic Church. His region is headquartered in New York City and serves two colleges, over 30 churches, and various charitable institutions in the US and abroad.

During his fifty plus years as a Franciscan friar, he served as a high school teacher and administrator in Brazil for nine years. Charles has been associate pastor or pastor of churches in New Jersey, Virginia, New York City and North Carolina. For over 30 years, he has also worked as a licensed social worker, family therapist and substance abuse counselor. For nine years he was vice-president of his region, which includes about 400 men serving on the eastern seaboard from Boston to Tampa.

Charles is currently an Associate Pastor at a 4000 family, bilingual parish in Durham, NC. He enjoys the proximity to Duke University, UNC State, and UNC Chapel Hill, with their opportunities for music, art and sports. He also enjoys the parks of North Carolina with their many hiking paths. Charles is fluent in Spanish and Portuguese, although he must admit his Portuguese is a little rusty. Charles is thankful for the good memories of his high school years in Girard.