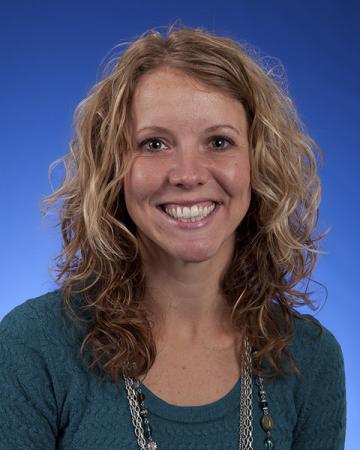 Courtney Thompson Nagle's (2000) high school career is marked by excellence both in the classroom and on the basketball court. Courtney was an integral part of the 1998 state championship (alongside sister and teammate, T.L.) and 1999 state runner-up Girard girls' basketball teams. She helped lead the yellowjackets to four District Ten and three ECL Championships. Despite battling ACL tears in both her sophomore and senior years, Courtney received all-county honors each of her four years of high school, including first-team accolades in her junior and senior seasons. Courtney was named MVP while helping team Pennsylvania win the USA Jr. National Championship in 1999, was Erie County's 2000 Pauline Pacileo Fortuna Memorial Scholarship winner, and was selected to the Down Under Australian Tournament All-Star team in 2000. Off the court, Courtney was active in Student Council, a member of the National Honor Society, and was selected by her classmates as Homecoming Queen and Prom Queen. At commencement, Courtney represented the class of 2000 as the valedictorian and received the Girard Federation of Teachers' Future Educator scholarship and the female "Darn Nice Kid" award.

Courtney continued her academic and athletic careers at Edinboro University. A four-year starter for the Edinboro women's basketball team, Courtney received All-PSAC Honors in her senior year, was a PSAC Top-Ten winter student athlete (2003-2004), received the NCAA Sportsmanship Award (2004), and was the first Edinboro University athlete to ever receive the NCAA Postgraduate Scholarship (2004). Throughout her junior year, Courtney wrote a weekly column for the Erie Times News about life as a student-athlete. Courtney graduated with a 4.0 in Mathematics and was recognized as the Outstanding Senior in Mathematics and Computer Science.

In 2006, Courtney completed her master's degree in Pure Mathematics (Bowling Green State University) and began her career within the mathematics department at Penn State Behrend. While teaching full-time, Courtney completed her PhD in Mathematics Education in 2012 (SUNY at Buffalo). Now an Associate Professor and Program Chair (Mathematics Education, Penn State Behrend), Courtney has established a record of excellence in teaching, scholarship, and service. Courtney was honored as the Department of Learning and Instruction Distinguished alumnus (SUNY Buffalo, 2015) and received both the Penn State Behrend Council of Fellows Excellence in Outreach Award (2014-2015) and the Mathematical Association of America's Allegheny Mountain Section Award for Distinguished Teaching (2018). Courtney has published more than 20 peer-reviewed journal articles, regularly presents research at national and international conferences, and was principal investigator on two prior National Science Foundation (NSF) grants. Recently, she led the writing of a third NSF grant which provides over $1 million aimed at attracting and preparing future math teachers dedicated to teaching in high-needs school districts and which has been approved to start this year. Six years ago, Courtney established a mathematics teaching conference which has grown to reach nearly 100 teachers annually. Courtney also serves on the Pennsylvania Council of Teachers of Mathematics (Secretary) and Pennsylvania Association of Mathematics Teacher Educators (Board Member).Â

The class of 2000 senior superlatives listed Courtney and classmate Joe Nagle as the "cutest couple." Courtney and Joe (class of 2000 male "Darn Nice Kid") married in 2006. They have two sons, Jackson and Benson, and are blessed to regularly enjoy spending time with both their families.