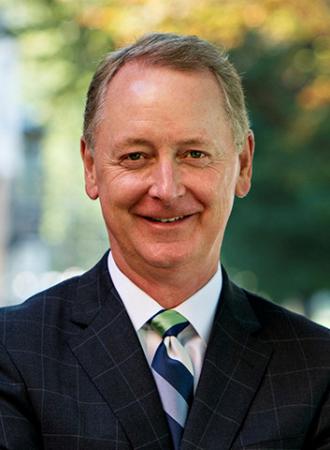 Brad graduated from Girard High School in 1972 where he played basketball, baseball and golf. During his senior year, he was voted All-County in golf and baseball and led the Erie County League in baseball with a .450 batting average. He was elected co-captain of the basketball team his senior year. In addition to his athletic achievements in high school, Brad was a member of the National Honor Society, debate team and U-Club where he served as Treasurer his senior year.Â Â

While at Dickinson, Brad met his wife, Karen, a fellow classmate. After graduation, they settled in Harrisburg, Pennsylvania area where they have lived since then. Early in Brad's legal career, he attended Georgetown University Law Center at night, earning a Master of Laws Degree in Taxation in 1986. Brad is admitted to practice law in Pennsylvania and Florida (currently inactive).Â  In addition to practicing law for 36 years, Brad served as an adjunct faculty member at the Penn State Dickinson School of Law, teaching a course in Business Planning from 1990- 2006.Â

Brad has been recognized in the publication The Best Lawyers in America TM each year since 1995, which also recognized him in 2014 and 2011 as the Corporate Lawyer of the Year in Harrisburg, Pennsylvania. In 2019, 2016 and 2012, this publication recognized Brad as the Tax Law Lawyer of the Year. He has achieved the highest peer review rating of "AV" from the Martindale-Hubble rating service. Brad currently practices law at McNees Wallace & Nurick, LLC where he served for a number of years as a Co-Chair of the Corporate & Tax Group.Â

Brad and Karen have two adult children, a son, Kyle, in Texas, and a daughter, Kristen, in North Carolina. Brad and Karen recently became first-time grandparents.