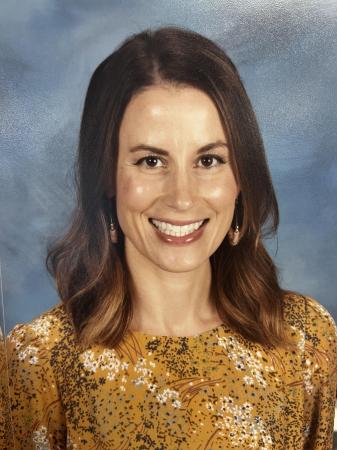 Ann Mimm Evans is best known for her achievements on the basketball court, as a member of the Girard High School Lady Yellowjackets basketball team from 1997 to 2000. Ann was a starter all four years at GHS. She was All-ECL Honorable Mention (freshman year) and All-ECL 1st Team her sophomore, junior and senior years. She was selected to the Associated Press Small School Girls All State 1st Team both her junior and senior year (98-99 and 99-00). Ann averaged 17.5 points per game and 7.7 rebounds her senior year, finishing out her 4-year career with 1713 points. During her years in high school, Ann was also a member of Student Council and National Honor Society.

Although Ann had many individual achievements during her time at Girard, she is most proud of the success of the teams she played with. She was a member of teams that won District 10 championships in each of the four years she was there, as well as two Western PA crowns and "trips to Hershey" (97-98, 98-99) and a state championship in 1998. In her time at Girard, the Lady Jackets had a record of 115-10. Ann still reflects upon her years as a member of the Girard Lady Yellowjackets as one of the most magical times of her life â€“ providing memories and a work ethic that she would carry through all walks of life.Â

Ann continued her basketball career at Niagara University, a Division-1 school in upstate New York. Ann played for the Purple Eagles all four years, starting both her junior and senior year and being selected as co-captain her last three seasons at NU (01-02, 02-03, 03-04). Ann averaged 12.8 points and 3.4 rebounds per game during her senior season and was also awarded the team's Hustle Award (2004). During Ann's time at Niagara she excelled academically. She was selected to the Metro Athletic Conference All-Academic Team in 2002, 2003 and 2004, as well as the Division I-AAA Athletics Directors Association Scholar-Athlete Team both in 2003 and 2004. In 2004 she graduated with her Bachelor's Degree in Secondary Mathematics Education as both a President's Honor Society and National Honor Society Inductee, with a 3.85 GPA. She also was the recipient of the Dr. George B. Banks Memorial Award for excellence in Mathematics at commencement.

After finishing her undergraduate education at Niagara, Ann pursued her Master of Arts in Teaching Mathematics at Bowling Green State University (2005) and served as a graduate instructor, alongside her former GHS teammate, Courtney Thompson Nagle. She then moved to North Carolina and began her teaching career as a high school math teacher and basketball coach. In 2015, Ann completed her Master of School Administration from UNC Greensboro. She served as an assistant principal for three years before being named the principal at Guy B. Teachey Elementary (Asheboro, North Carolina) in 2018. Ann serves as a volunteer soccer and basketball coach for the YMCA and local recreation league. She continues to serve as principal and enjoys both the challenges and rewards that each day brings.

Ann lives in High Point, NC with her husband Brian Evans, a native of North Carolina, and their two boys, Mitchell and Winston and daughter, Gracen.